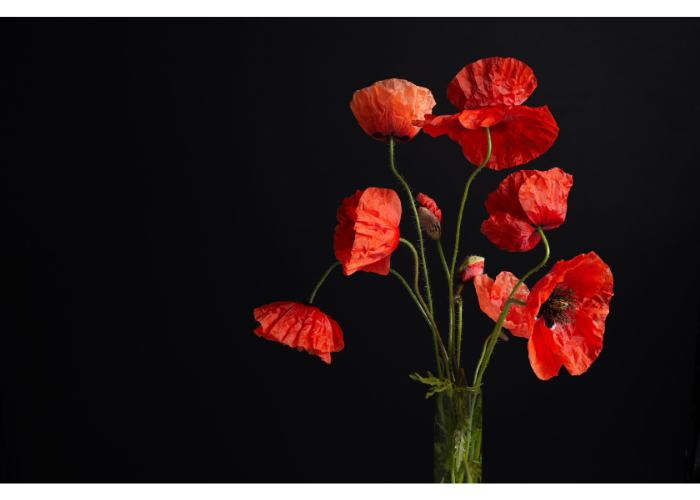 Why do we wear them?

I don’t know about you, but I find something incredibly moving about the sight of poppies. There is something so simple and yet so meaningful about how they actually look. Maybe it’s because we’ve all become accustomed to seeing the artificial versions every November, and yet I love to see them in the Spring too, as they emerge in a way that signifies new life and growth.

Poppies were chosen as a symbol for us to commemorate those who died and suffered in the First World War, because these are the flowers that grew on the battlefields after the war.

To me, that means that there is always light, even in the darkest of times.

Artificial poppies were first sold in Britain in 1921 to raise money for the Earl Haig Fund in support of ex-servicemen and the families of those who had died in the conflict. Clearly, this idea struck a chord in the hearts of many, because the custom has grown, and the funds raised are used to support many who have given us so much.

If you had the chance to visit the Tower of London, (2014- 2018) when the breath-taking Poppy Installation by Paul Cummins was on show, you will have been in awe (I was!) of the work and love that went into each and every one of the 888,246 poppies.

Is there a correct way to wear your poppy?

Some say it should be worn on the left breast, or close to the heart. To be honest, there is no real correct way to wear it – the Royal British Legion would suggest that you wear your poppy with pride.

If you want to be practical about it, just consider whether you’re left or right-handed. If you’re right-handed, wear the poppy on the left – you’re less likely to budge it or lose it!

A minority of people find the poppy offensive, because of its association with the Opium Wars of the 19th century. The poppy symbol is not intended in any way to be offensive. The colour choice in no way reflects war, politics or anything negative. The red poppy is purely meant to be a symbol of remembrance and hope.

You might see white or gold poppies in circulation too. The white poppy is simply a symbol for peace. A gold version was brought out by the Royal British Legion to commemorate 100 years since the First World War. Some are completely gold, or just had sections or leaves in gold.

There are also suggestions that the poppy leaf should point in a particular direction, although that is also a myth.

Poppies signify as a symbol of love, loss, commemoration and yet more importantly, they signify hope.

You don’t have to wear a poppy at all, although if you choose to – wear yours with pride.